My kids are too young for college but I was talking to a friend whose college sophomore son had to move back home.  He was bummed about it.  As a second year college kid he got accustomed to studying with a group of friends.  He relied on them for encouragement to go to the library and hit the books.  He also liked his teachers.  As an accounting degree major circa 2000, I was that kid.  Although I never lived on campus, like him I did rely on a group of friends to go study with.

However my grades were not great.  Although I maxed out my teacher time meetings and closed the infamous Leavey Library at USC my grades suffered.  I graduated but I won’t lie it was a struggle.  No matter how much I studied with friends, it helped, but the struggle was real for me.  However the kids that never came to class were acing all my accounting classes.  I thought they were naturally smart.  You know the kind of people that seem to never study or prepare for anything and still do well?  I thought they those kinds.

So during my senior year when I started to loosen up, I started to go to visit those “smart kids.”  I became good friend with one and he invited me to his apartment.  When I got there, he was living with 4 other room mates.  They were all playing video games with their headphones on.  In 2004 that was a weird scene for me.  Then I thought these guys were real geniuses: not only that they weren’t studying, but they were playing video games online?  But as I continued to go there I realized that they were doing other things.  They were also going to this website called “YouTube.”  Now remember 2004 is still the year when Myspace was still a household name.  And when you said Facebook people said huh?

It turns out what these kids were doing is they were going on YouTube to learn the topics they were covering in class.  In addition these kids had no respect for the teachers.  They thought they were overpaid statues whose only job was to grade papers.

So to all the college kids out there, having to move back home is not the end of the world.  It might even be a blessing in disguise.  Make the attitude adjustments that you need to make.  And remember, you can do it, if people were studying online in 2002 you can do it too.  Good Luck! 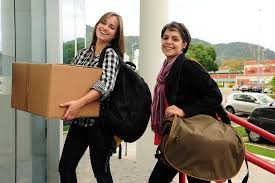